We continue with mystical experiences of the Bible.  After the Fall in Genesis 3 and the calling of Abraham in Genesis 12 this may be the most important hinge in the Old Testament.  God tells Moses that he is the man to defy Pharaoh and lead hundreds of thousands of Israelites out of their slavery in Egypt.  Moses’ response of course is “Not me! I am not the person for such a job!” 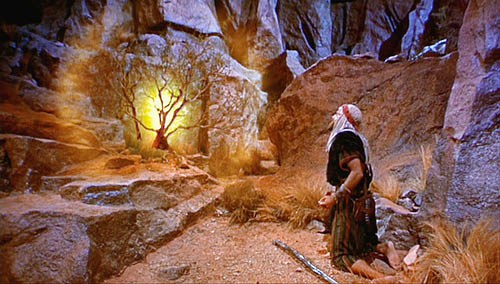 What we see in the Exodus passages are people meeting the awesome strangeness and other-ness of God—an experience of the Numinous, as Rudolf Otto described it.  In Genesis after the Fall, God shows up only in disguise, so to speak: as a voice, as angels, as a vision while asleep. In Exodus the mission is apparently so critical that he shows up without disguise. There is so much at stake: His people must know who He is; hundreds of thousands of them must walk out of Egypt not only unscathed but rich; Pharaoh’s gods and magicians must be publicly defeated; the people must never forget this God is their rescuer and redeemer who can do absolutely anything; a new nation with unprecedented laws of justice, mercy, and reverence must begin, a way of life that God intends to spread over the earth and end evil forever.

But God coming without disguise creates a confrontation with absolute holiness.  God is love, but God is also absolute goodness, and in His presence we do not need to be told that we are very much not.  Moses hides his face.  For the same reason, centuries later, Peter will tell Jesus, “Go away from me, for I am sinful man.”

This is also the momentous time when God reveals his true, personal name, not a title. Often transliterated from the Hebrew as YHWH, it is mysterious and so is its pronunciation.  But it seems to mean “I Am Who I Am,” that is, the self-subsistent one; the only one that cannot be compared to or depend upon anything else.

Exodus 3: God, The Fire that Never Goes Out, Speaks to Moses

Moses was shepherding the flock of Jethro, his father-in-law, the priest of Midian. He led the flock to the west end of the wilderness and came to the mountain of God, Horeb. The angel of God appeared to him in flames of fire blazing out of the middle of a bush. He looked. The bush was blazing away but it didn’t burn up.

Moses said, “What’s going on here? I can’t believe this! Amazing! Why doesn’t the bush burn up?”

God saw that he had stopped to look. God called to him from out of the bush, “Moses! Moses!”

Moses hid his face, afraid to look at God.

God said, “I’ve taken a good, long look at the affliction of my people in Egypt. I’ve heard their cries for deliverance from their slave masters; I know all about their pain. And now I have come down to help them, pry them loose from the grip of Egypt, get them out of that country and bring them to a good land with wide-open spaces, a land lush with milk and honey….

Then Moses said to God, “Suppose I go to the People of Israel and I tell them, ‘The God of your fathers sent me to you’; and they ask me, ‘What is his name?’ What do I tell them?”

God continued with Moses: “This is what you’re to say to the Israelites: ‘God, the God of your fathers, the God of Abraham, the God of Isaac, and the God of Jacob sent me to you.’ This has always been my name, and this is how I always will be known.

Ken Kesey's father to his son: "The problem with you is, you're always trying to unscrew the inscrutable." View all posts by Mark Filiatreau