Finishing up our selection from Gay Taylor’s pseudonymous memoir. Not long after the previous events, she and a friend visit the ruins of an Abbey and have one of the most astonishing experiences anyone has ever had.

January 5th, 1948. The highlight of my visit, and one of the occasions of our lives, came on New year’s Eve. Alison and I went by a variety of buses to Ripon, and set off on a cloudy winter afternoon, in a taxi to the gates of Fountains Abbey.  I had clamoured for years to revisit it, for I had loved it as a child and had never seen it since.

We dismissed the taxi at the gates, walked by frost-whitened paths between silvery evergreens, then down towards the roar of the Skell [river] and the dim lovely ruins.

Repair-work was going on and scaffolding towered above the Chapel of the Nine Altars. As dusk fell, we stood together on the south side of the cloister-garth, looking north, towards the cedar and the great grass-grown walls and the tower. As as we stood silently watching, they began to change. 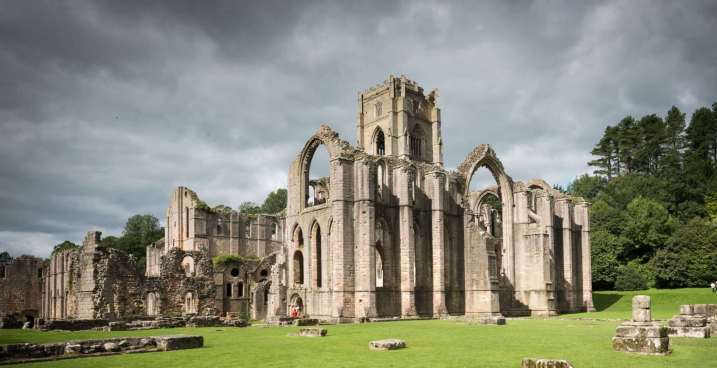 A soft, silvery-amber and quite unearthly light like warm moonlight lay over them.  But there was no moon; it was not due to rise for hours yet. In utter silence—where was the roar of the Skell?—the whole ruin changed, rebuilt itself: the walls were intact, the church and the Chapel of the Nine Altars became roofed and perfect. The pinnacled tower stood out newly finished, a deeper amber than the rest. The entire structure was silver-gilt in colour, and this colour seemed to be struck out of it by the silvery light in which it was bathed. We both stood awestruck, wordless, not moving, for what seemed a long time. “There’s no scaffolding,” breathed Alison at last in a soft amazed tone. I didn’t answer, for I thought, “Why should there by scaffolding? We’re seeing it as it was about 1520, when Huby’s tower was finished, and they’ve only just removed the scaffolding.” But then I realized that we were both seeing the same thing. She said later that she had meant the scaffolding that showed above the Chapel of the Nine Altars, where (certainly from the time and place in which we now were) there was no scaffolding.

We saw no Cistercian monks, brought back no useful information whatever, we merely stood for a timeless moment, for eternities or for ten minutes, seeing Fountains as it was a few years before the Reformation.

Last night, as usual, I sat and composed myself. It was about a quarter to eleven by my very wrong clock. And almost at once, something akin to the “sun flower” came back—that indescribably sense of the inflooding, enfolding, brimful-filling of God’s burning love, and the knowledge that the material universe, the atmosphere, world, body are screens of mercy, which in our fallen state are there as a protection. That God’s love meeting only foulness would destroy and disintegrate it; that the screen is our shelter and our opportunity. But it is no more than a screen; there is no least corner of the universe where God’s love is not.

And for the first time I began to understand this strange idea: the spatial location of the Heavenly Heart. It was like “the fifth month, when the child moves.”